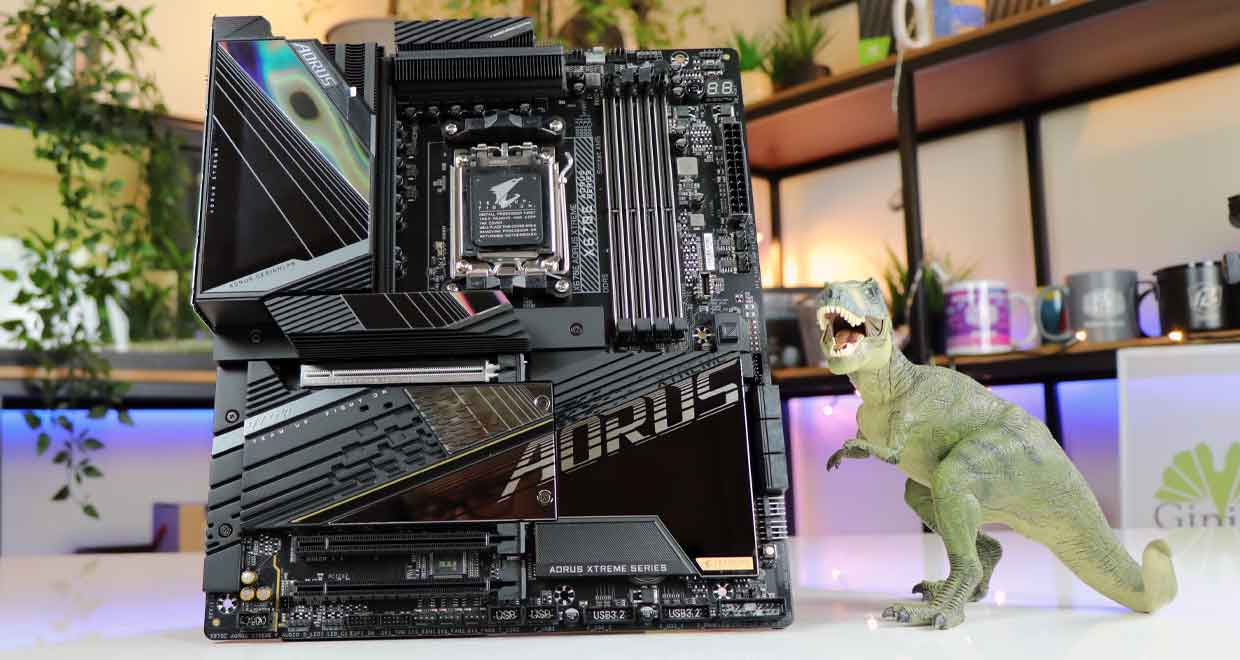 On the ultra high end, Gigabyte offers the X670E Aorus Xtreme. This AMD socket AM5 motherboard is a “Premium” platform to accommodate a Ryzen 7000 series processor.

We are dealing with a showcase enthroning a fairly large family of X670E solutions. The beauty is armed with a mechanism designed for gamers and overclocking enthusiasts. Beneath a robe dedicated to cooling, we have robust mechanics, armed with top-notch equipment. It ranges from four M.2 NVMe PCIe 5.0 ports to 10GbE Ethernet, Clear CMOS and Q-Flash Plus rear buttons, and an 18+2+2 phase power supply scheme and heatsink solutions. Thermal Fins Array III and M.2 Thermal Guards III.

The beautiful request on the other hand of the place with its format E-ATX. Here is his full presentation.

The X670E Aorus XTREME is Gigabyte’s current showcase for AMD’s new Ryzen 7000 series platform. It is positioned as the benchmark alongside the X670E Aorus Master and X670 Elite AX.

Its E-ATX format requires caution because you have to make sure that the case is able to accommodate it as it should. Its exact dimensions are 305 x 269 mm. Gigabyte promises a complete equipment meeting all the needs whether we are talking about storage, RAM, graphics card or processor.

The design of her dress is largely provided by advanced thermal design. It is also at the origin of its consequent weight.

We find a set of radiators around the socket communicating using a heat pipe and at the level of the first M.2 port. Gigabyte uses several types of finish with a nano carbon coating, brushed aluminum or even of the mirror.

The result is a sober but racy approach that lets a racy and fiery temperament transpire. We are in a top-of-the-range atmosphere breathing quality and over-equipment.

A back plate occupies the entire surface of the PCB while freeing the rear of the socket to allow the installation of a cooler. If it participates in increasing its weight, it provides a role of passive heat dissipation while reinforcing the rigidity of the whole.

On this criterion, we also have a reinforced PCIe x 16 port to accommodate long and heavy graphics cards. The same design is found at the level of the four memory slots and the 24-pin ATX connector.

The PCB is full of little intentions here and there.

For example, a push button releases the graphics card from its housing, the six SATA connectors are at 90° and an LED display allows you to follow the different phases during startup.

It is particularly useful in the event of a problem since the code displayed gives valuable information.

We also have a Power button on the top and a Reset on the bottom and even measurement points for direct voltage readings. This concerns for example the processor, the memory. At their side, we find a group of four LEDs called “Status LEDs”. It visually offers to check if the processor, the memory, the graphics solution or even the BOOT are working correctly after powering up.

The card is equipped with 10 4-pin connectors, enough to drive a large number of fans and Watercooling systems. Each fan connector supports both PWM and DC fans and a Watercooling pump and delivers a maximum power of 24W (12V x 2A) accompanied by overcurrent protection. In addition to the classic and essential CPU-Fan, we have four connectors for case fans (SYS-FAN 1, 2, 3, 4), four connectors for pumps (SYS_FAN5, 6, 7, 8_PUMP) and a CPU_OPT. Two headers allow the connection of temperature probes to monitor, for example, the interior of a compartmentalized enclosure.

We also find a NOISE_Sensor connector to monitor this time the noise pollution of the configuration.

Gigabyte does not overlook lighting with a dedicated area on the card. Named Aorus Animed Display, it is located at the level of the aluminum housing of the rear connectors. It highlights the Aorus logo using different colors and effects. We have several dedicated headers on the map.

The card is equipped with an LGA type socket. The Ryzen 7000s do not have a pin.

Clearly, we find the same design as that used by Intel for several years now.

On the storage side, the six SATA 6 Gbps ports are accompanied by four M.2 NVMe ports supporting 80mm and 110mm drives. Note that we have quick fasteners in each case. The SSD is fixed in its plug then consolidates by clipping.

To all this are added three PCIe x16 connectors. The first is wired in PCIe 5 and the other two are PCIe 4.0 in X4 and PCIe 3.0 in X2 standards.

The reason is to be found on the side of the M.2 ports opting for PCIe 5.0. CrossFire technology is provided in x16 and x4.

Regarding audio, we have a Realtek ALC1220-VB chip (ESS ES9118 DAC) while a Marvell AQtion AQC113C solution provides a 10 GbE wired network. The wireless network is also part of it using a Wi-Fi 6E AX210 solution that also provides Bluetooth 5.3.

The power supply is based on a classic 24-pin ATX but also two 8-pin EPS.

On the side of the rear connectors, Gigabyte has planned to help overclockers with a Clear CMOS button to reset the BIOS settings in the event of overclocking too aggressively.

To all this are added on the map:

Finally, the beauty provides advanced monitoring to follow in real time the voltage, the temperature, the speed of the fans or the noise pollution while being alerted in the event of failure of a fan and a Watercooling pump.