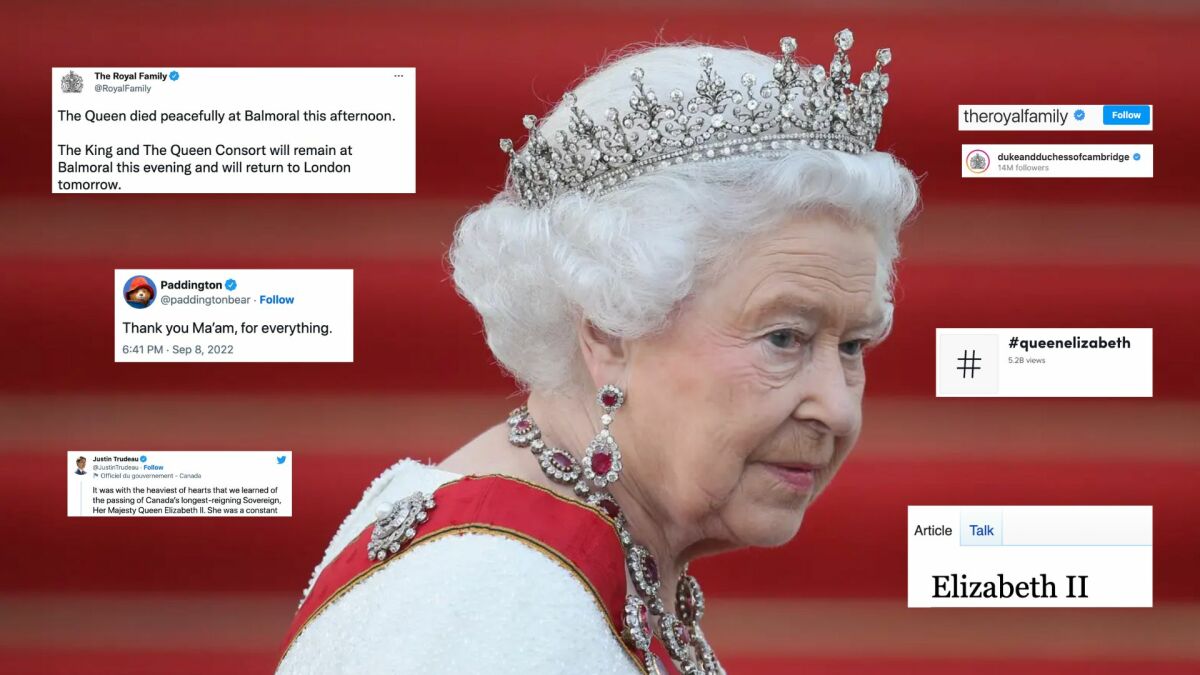 This is the first time in history that a British monarch has died and social media exists. With the latter, the Queen’s death has been documented, described, and analysed in a hugely unprecedented way. There were hashtags and tweets; TikTok explainers; and many, many, many memes (think new levels of niche and zeitgeist-y).

As with most major events, Twitter was a central hub for conversation, with timelines oscillating between the emotional, the critical, and the entertaining (also controversial — Newsweek described some of these tweets as “distasteful”). Elsewhere, TikTok presented explainers and news-y items, delivering information to users about what happened during the Queen’s life and what happens now. The hashtag #queenelizabeth now holds over 5.2 billion views on the app.

The news itself was broken to the public by the Royal Family Twitter accountwhich publicly announced that she “died peacefully” at 6:30 p.m. on the day.

Tributes poured in from world leaders, celebrities and members of the royal family. Brands and businesses also jumped onto the bandwagonposting tributes that came across as somewhat bizarre depending on the company. Think: Heinz, Crazy Frog (?), Domino’s Pizzaand Gregg’s. These kind of posts account for some of the bizarre ways people found out about her death in the first place.

The official accounts of the Royal Family also had to adjust — and act quickly — in the face of the news. In real time, people witnessed the speed with which the information arrived, posts were added, and titles changed. A statement from Prince Charles, now His Majesty the Kingwas posted with haste; the Twitter handles for Prince William and Kate Middleton were rapidly changed, including the addition of a title. The pair’s profile now reads: “The Duke and Duchess of Cornwall and Cambridge”.

There are also specific official protocols for these accounts now. According to reports by Politicomany of the “immediate plans” following the monarch’s death are directly related to social media. These plans include a digital halt for governmental accountsmeaning non-essential content will not be posted. Meanwhile, the UK government and Royal Family’s website will display as states of mourning, emblazoned with statements on the home page alongside black banners honoring the Queen’s death.

These actions are a testament to both the significance of social media and how many eyes are watching official handles and pages, always. This is largely new territory for the British monarchythat actual policy must be invoked to rightfully commemorate the event. Digital and traditional protocols are seemingly at par with one another now, an indication of “institutions” like the Royal Family having to shift with the times.

Depths of Wikipediathe social media page(s) dedicated to unpacking Wikipedia’s strangest moments, also tracked how editors jumped to doctoring Queen Elizabeth II’s Wiki page. This, in itself, is a peak digital culture with historic incident crossover: a niche internet account tracing the online biography of the Queen, being edited in real-time.

but there was more to do! the Queen Elizabeth II article had more than 55 edits in the next 15 minutes — changing verbs to past tense, updating categories, updating the infobox, etc

As was the case with news of her death, the impact of the Queen on social media is applicable to her lifetime: online users memefieddiscoursed, and revelled in the Queen — her public image, outfits, lifestyle, etc. — for years. During her reign, she became a subgenre of internet culture, almost ubiquitous to the meme cycle and digital conversations, making thousands of appearances in unrelated tweets and Instagram accounts.

With this digital documentation of her death, the experience also, and notably, became a shared one, both within the UK and globally. No matter what personal feelings one harboured towards the Queen or the Royal Family, we could all turn to social media and the internet for updates and commentary. In the midst of the historic moment, social channels became a sort of diary, making history in itself. Jokes, critiques, and reactions poured out on social media, with no time to spare, as an era came to an end.