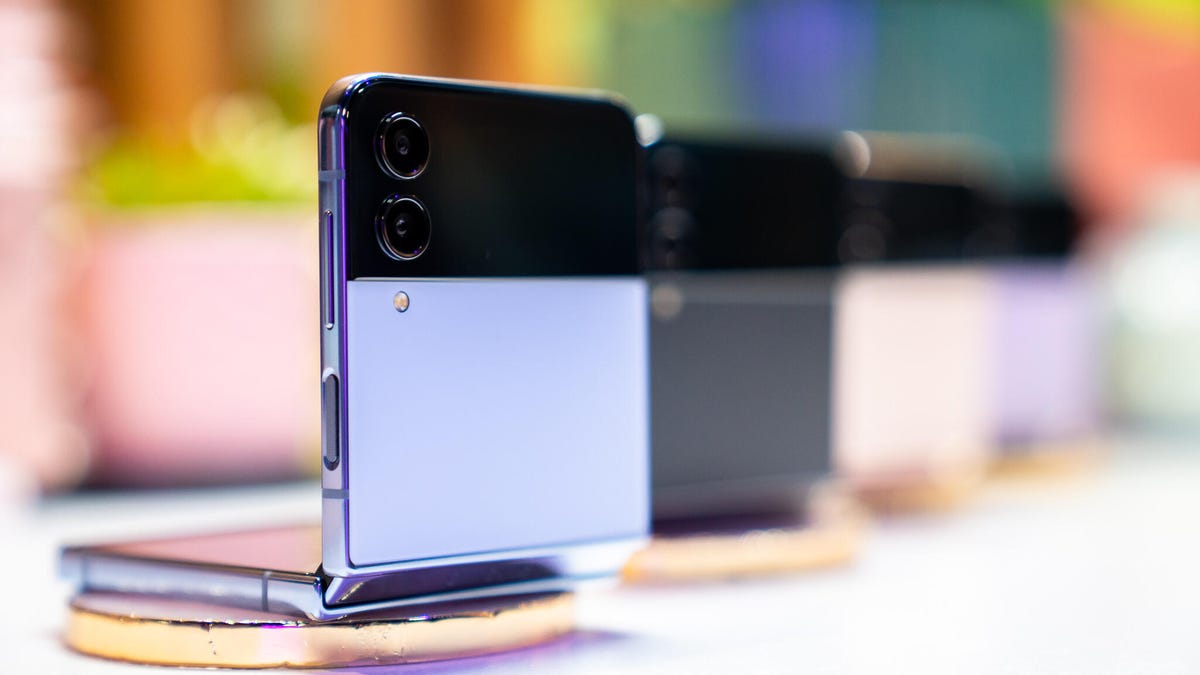 The mobile phone revolution has been around long enough that we can look back wistfully at our earlier phones and think about the features we loved that we no longer have in our latest phones – whether it’s that Blackberry keyboard that we typed on so quickly or the pleasing snap-and-click sound of hanging up a phone call with a flip phone.

And with each passing year, these little slabs of glass and plastic become more deeply integrated into our daily lives as they launch new features to let us track our health, pay for our groceries, start our cars, scan our way onto the train and much more. They’ve become so omnipresent in our lives that we – consciously or not – now think about them the way we think about our clothes or our shoes. The phone we carry (and the cases we put on them) have evolved into part of self-expression.

Those are the first things you’ll notice about the Samsung Galaxy Z Flip 4, but there are other benefits. In fact, the two things I like most about the little sister to Samsung’s Galaxy Z Fold 4 are not the features you’ll find in any headlines or marketing materials about the Z Flip 4.

I’ll tell you about my two favorites things first, and then I’ll launch into the two big things that most people will dig.

I was an early user of the original Galaxy Flip when it was first released in February 2020. And the two things I liked the most about the phone back then are the same two things that appealed to me while testing the Z Flip 4 over the past couple of weeks.

1) It doesn’t fall out of my back pocket

As phones have gotten larger and larger in recent years – maxing out at 6.8 inches – they’ve become more difficult to keep from falling out of my back pocket. On a recent trip to New York City, my work phone unknowingly fell out of my back pocket during an Uber ride from the airport to my hotel, and it took all day to coordinate with the driver to get it back.

The Galaxy Flip 4 offers a solution for that problem. Because it’s so much more compact when it’s folded up, it nestles inside of a back pocket much more securely. So I rarely ever worry about it falling out and getting left behind.

2) It makes a great hotspot

To be fair, my situation is a little unique. I’ve been carrying two phones since 2010 – an iPhone as my personal phone and an Android as my work phone. I tend to lean on my Android phone as a hotspot when I’m traveling or working from remote locations. I find Android’s hotspot mode works more consistently, even though I regularly swap my SIM card between different Android phones that I’m testing or trying out.

The Z Flip 4 is my favorite hotspot phone yet. Part of that is because it folds down so small (even a little smaller than the original Z Flip and last year’s Z Flip 3). That’s especially handy when I’m at a café sitting at one of those small, circular tables and the phone has to share the surface with my space-hogging MacBook Pro 16-inch laptop.

The other factor is the Flip 4’s cover screen, which is big enough to show meaningful data on its notifications but small enough to keep distractions to a minimum. When I’m working remotely on my hotspot, I’m often heads-down doing focused work. I can put my phone face down to avoid seeing notifications at all but then I sometimes pick it up to check it when it buzzes and get distracted. Alternatively, I can see the brief notification on the cover screen of the Flip 4 and make a mental note of how quickly it needs a response.

The two biggest reasons most will like the Flip 4

Admittedly, my two favorite features of the Flip 4 are fairly specialized and may not apply to most people. So let’s jump into the two big reasons that would entice people to flip from their current slab of glass and plastic.

1) It offers innovation for capturing photos and video

You’ve likely seen the headlines, the ads and heard the buzz about the Flip’s handy features for shooting selfies and group photos. It’s true – all of it. You can set this thing on a table, a ledge, a stone wall, a concrete pillar – you name it – and then swivel the screen to the perfect angle, use a simple wave gesture to start the timer, and easily get a photo of yourself or your group. No tripod required.

That standard selfie mode uses the 10MP ultra-wide camera in the pinhole on the front of the screen. However, you can kick it up another notch. You can double click the power button when the flip is closed and put the cover screen into a selfie preview. Then you can slightly open the phone to put it in tent mode, double-tap the cover screen to get a full preview, use the simple wave gesture, and voila you have a higher-res selfie or group photo using the 12MP wide angle or 12MP ultra-wide on the back.

You also hold the Flip sideways and use the top screen as a viewfinder and the bottom screen for controls where you use your thumb to start and stop video. This “camcorder mode” is oddly appealing to use. The Z Flip 4 has some other unique camera tricks that I’ll cover in a separate how-to story.

My wife is a professional photographer and saw me testing some of the camera features of the Flip 4 and was intrigued and a little jealous, even though she’s always been an iPhone user and has never been interested in Android.

2) The Bespoke Edition makes it a style champ

The Z Flip 4 is a phone that will get you attention. Now, I don’t recommend tying your identity to a piece of technology or wasting too much of your energy thinking about how to draw more attention to yourself. Instead, do excellent work and be a good human being and people will take notice over time.

That said, if you do appreciate beauty and symmetry then the Flip 4 is a very likable little device. Just flipping open a flip phone in this day and age will get noticed because virtually everyone is carrying a little black slap of plastic and glass. And the Flip 4’s signature color, Bora Purple, is enough to turn a few heads as well.

But where the Flip 4 really stands out from a style point of view is the Bespoke Edition versions where you can decide between five different colors on the front plate and the back plate, and between three different colors for the metal frame.

According to Samsung, nearly 20% of Samsung.com Galaxy Z Flip 4 pre-orders in the U.S. have been for the Bespoke Edition. With a multitude of color combinations to select from, the ability to personalize at no extra cost is one that clearly resonates with consumers.

This phone still needs a case, so I’d recommend Samsung’s own Galaxy Z Flip 4 Slim Clear Coverwhich will protect it while still displaying whatever color scheme you choose.

When I looked at the camera specs before trying the Z Flip 4, I shook my head. It doesn’t even live up to the minimal version of the Galaxy S22 standard version, which has a list price of $800 and a street price more like $650. That’s tough to swallow for a $1,000 flip phone.

However in real-world use, I found the Z Flip 4 cameras to be very capable, which shows how much of the work is now being done in the software. It took clear, crisp photos and even the low light performance was impressive.

The photos from the back cameras had a much more vibrant color profile than the front-facing camera. My biggest complaint was that there were times when I really missed having an optical zoom. Even a 3x optical zoom like the S22 would have been great, let alone the excellent 10x optical zoom on the S22 Ultra.

Past versions of the Flip have sometimes struggled to get through a day on a full charge. With its expanded 3,700mAh battery (up 12% from the 3,300mAh in the Flip 3) and the more efficient Qualcomm Snapdragon 8+ Gen 1, the Flip 4 can now make it through a normal day. However, it’s not as powerful as other Samsung phones. The Flip 4 can now take advantage of 25W super-fast charging, which can charge up to 50% of the battery in 30 minutes. You have to buy the super-fast charger separately for about $30.

The Flip’s interface tries to take advantage of the two screens by allowing you to use a different app on the top and bottom, but it’s not easy to figure out how to do it and in practice it’s fairly limited. The cover screen keeps getting more useful with glanceable info and quick settings changes, but it would be great to see Samsung expand the options for taking advantage of it and allow more third-party apps to tap into it.

Lastly, when the phone is folded out into portrait mode the screen is pretty slim and is a little cramped to type on. You can rotate it into landscape mode and use a split keyboard but that leaves you with little viewable information on the page. This device could easily be a little wider without sacrificing much in terms of weight and compactness – and it would improve the usability of the screen in portrait mode and allow the battery to be a little larger.

The Flip 4 is a nice refinement from the big leap forward Samsung made with last year’s Flip 3, with better battery life, faster charging, a slightly smaller form factor and continuing software improvements.

Flip 3 owners will be fine sticking with last year’s model, as is often the case these days.

For the rest of us, the Flip 4 has become one of the most innovative phones in the world for people who take a lot of photos and videos with their phones. It will especially appeal to vloggers and those who like to use mini-tripods to self-shoot more professional-looking images. And the Bespoke Edition for customizing your colors offers a nice way to give a little style and uniqueness to the device.

If the body of Z Flip 4 was a little wider and the camera system included a telephoto lens, it would be even more appealing. Nevertheless, there will be plenty of photo and style enthusiasts who will be happy to make the jump to the Flip 4 today.