Stacey Abrams’ advisor speaks politics to the next gen. (These aren’t your grandma’s civics lessons.) 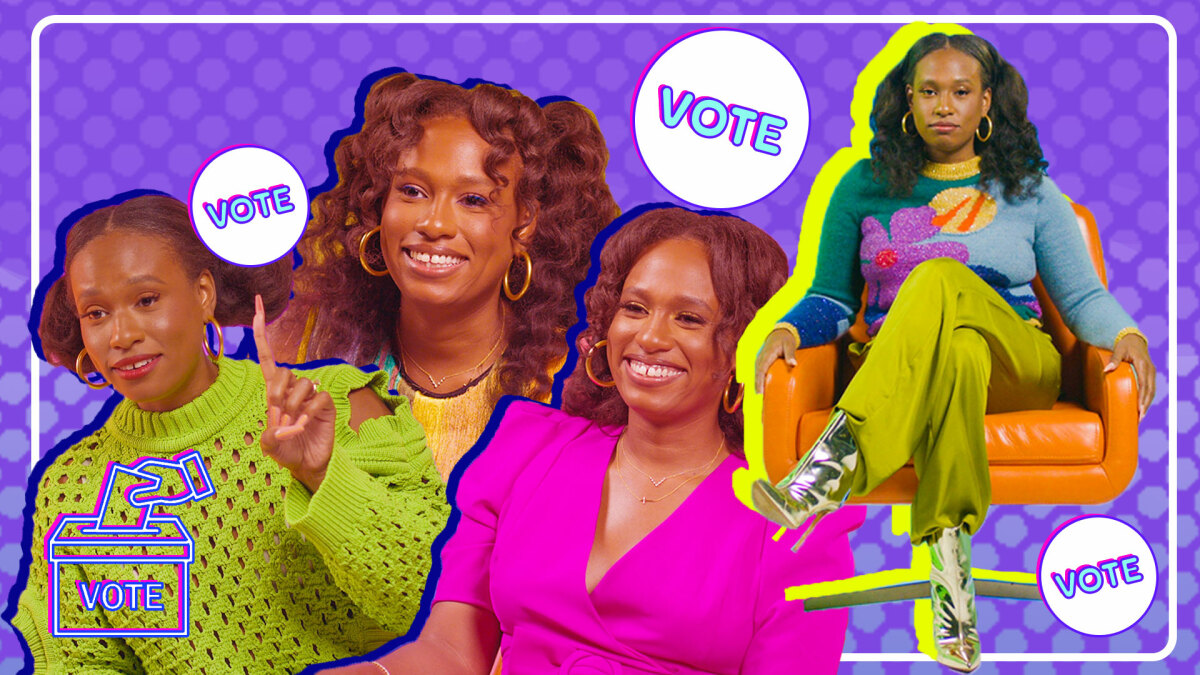 At this point, the general public should know that local elections matter. We all understand that state elections are crucial. But what does a governor actually do? How do state measures work, and what exactly is an attorney general? As midterm elections approach on Nov. 8, the push for greater voter turnout is actually highlighting a more basic goal: making sure communities actually know how it all works.

“Civics for the Culture” is a digital series created alongside Fair Fight Actionthe organization founded by political leader Stacey Abrams to promote fair elections and fight voter suppression in her home state of Georgia and across the nation. As an extension of this work, “Civics for the Culture” specifically seeks to bridge remaining knowledge gaps and stir up voter engagement within Black and brown communities — an investment that’s not just for this current campaign, but a forecasting pledge to these communities’ (and the culture’s) futures.

The series is an at-your-level civic education course that combines the visually engaging nature of current influencer-style video content with “what you need to know” explanations, in the vein of Schoolhouse Rock or even a less satirical, more educational Be them. It was created and is still written, produced, and hosted by Chelsey Hallan advisor to Abrams and the director of media and brand partnerships at Fair Fight.

The 32-year-old first worked with Abrams as a legislative aide almost a decade ago, after graduating from Indiana’s DePauw University. Later, while bolstering Abrams’ 2018 campaign as a special assistant and senior fundraising advisor, Hall realized along with the team that their standard politicking was actually a two-pronged effort, half vote gathering and half civics education.

Born from this acknowledgment, “Civics for the Culture” is easily digestible and easily shareable, in clips that feed into the growing short-form video moment. And while that’s not an uncommon tactic among nonprofits, political campaigns, and even news organizations, it is a rarity to have such a clear audience and focused voice behind that content form.

The one-year-old series has run for what is effectively three seasons now, a revamp of an earlier 2020 iteration that saw celebrities take on the mantle of civics education campaigns. The new version has already covered a swath of historical and political lessons, but this latest upload of videos and social media posts are much more pertinent, addressing voters directly ahead of November’s local elections. The first two episodes explain the basics of political campaigningissue-based voting, and how to spot disinformation and combat the spread of misinformation. In the third episode of the season, Hall encourages people to vote earlyexplains absentee ballots, and includes links to check the status of a ballot. Episode four sees Hall getting into the power of local and state reps.

And in the most recent installment, released Nov. 3, Hall dives into voter turnout and the power of a single vote at the local and state level. From Hall to camera: “Don’t let this shit scam you!”

In a conversation with Mashable ahead of the latest episode release (and an important Georgia governor election), Hall discusses her own passion for this work, the power of accessible and creative civics lessons, and the importance of showing an electorate that they’re valuable before and after elections.

Mashable: When I watch “Civics for the Culture,” I can sense both a passion for your political community and a clear expertise. How did you get into this work?

I’m a Grady Baby. If you are from Atlanta, everybody knows what it means when you say you’re a Grady Baby [Editor’s note: A Grady Baby is a colloquialism for someone born in Atlanta, at Georgia’s Grady Hospital]. But I was also raised in Detroit. My parents and my grandparents were really politically active. I distinctly remember my grandparents sitting at the table talking about politics, and my mom and dad taking me to go vote. My mom and my dad love talking shit when it comes to politics.

My next memory was my mom and dad knocking doors for Kwame Kilpatrick, who was running for mayor of Detroit [in both 2002 and 2005]and how devastating that all turned out. By the time I was in high school — with him going to prison and being indicted on so many things — I had really given up on politics. Somehow I got back into it in college, and so, once I graduated, I immediately started working for leader Abrams as her legislative aide.

I really do give it to Stacey as the person who politically raised me this last decade. Helping me shape and form my understanding of how the process works, how I operate within the process, what that means for people who look like me and her — what it means for folks who don’t look like us — and where our power actually lies.

Those experiences are what led you to create the digital series “Civics for the Culture”?

We were in a very unique space [in 2018]. We couldn’t just campaign, we actually had to be teaching our electorate. We had to change the culture around voting, change our habits.

I wanted to be able to solve for what we had to do in 2018 this round. Let’s start teaching our folks a year or two years out from the election about the importance of the governor. I think we’ve nailed it on the mayor. We’ve nailed it on the senator and the president. But the governor, the attorney general, these are roles that we do not explain in depth. We don’t talk to our folks in a way that is really going to resonate with why it’s important for their lives. “Civics for the Culture” is a targeted campaign to engage and educate young Black and brown folks, 18 to 35 year olds — I’m literally talking to myself!

The gap, in terms of engagement, has always been in understanding. Not the fact that we just don’t want to vote, but why are we voting?

Why did you feel like a digital, social media-based campaign would be effective? And how does it fit into Fair Fight?

I scroll on TikTok all day. I started this series with really long episodes. That content needed to be out and needed to be in-depth, but nobody wants to sit on their phone and watch a 10-minute video. Even though I’m cute! Even though it’s visually engaging! I wanted it to be as succinct as possible so that when you are scrolling, you can stop for one minute and get my whole episode in. My goal for Season 3 is to make sure that folks felt like it was easy to just share it on their socials… Also that it didn’t feel like I was just talking at people, but I was talking among ourselves.

I think social media is extremely powerful. I was adamant about creating my own Instagram page for “Civics for the Culture,” because that “brand” looks different than Fair Fight. It needed to feel not like a catchall of all voters, but very specific to the voters I am trying to reach. So we have a lot of Black and brown faces on our page. There is so much hip-hop in our promo videos. And even what my cover photos [on Instagram] look like — they don’t look like a campaign graphic. It looks more like how to catch a lie. Everybody wants to know that, whether it’s in a relationship, politics, money, whatever.

I’ve utilized social media to center “Civics for the Culture” as a part of our everyday lives. I think social media and the ground game go hand-in-hand. Folks will always be able to be out on the ground. And sharing my post, doing phone banking, just elevating the fact that this even exists, moves the needle.

The series started well before election day. What went into that timing?

There was so much that was happening in 2021. [Hundreds of] restrictions on voting were introduced across the country. [Legislators] saw Black and brown people come out in 2020, and they said, “No. Absolutely not.” It was important for me to dive into Senate Bill 202 [Editor’s note: Senate Bill 202 is a 2021 Georgia law that restructured much of the local voting process] before voting started to occur. Letting people know that even though these anti-voter bills are coming out, this is how you can protect yourself… I wanted to make sure we were all equipped and prepared before we all started voting.

I wanted Season 2 and Season 3 to prepare us in real time for what’s happening. Season 3 launched in September, and that’s when people really start paying attention to campaigns.

In the latest episode, out today, it’s clear that “Civics for the Culture” is not a campaign that ends on election day. It seems like it’s helping communities beyond submitting their ballots with a lot of intention and care.

The intentionality and care is for a reason. These are my people. I’m not going to just leave you. I’m not going to give you a bunch of information and not tell you how to utilize it or walk you through the process. That’s not how we continue to own our power and keep showing up.

[The community has] had a lot of things dropped on us or claims that we are so apathetic. Actually, [people] just haven’t been doing the proper investment. We haven’t really been talking to our folks the way we need to. But Fair Fight? We don’t wait until three months before the election to start talking to [voters] saying, “We care.” We start two years before the election. We start a year before the election. These are our folks, and I think that care has been left out of the political space for a minute.

As the host of an educational series, how do you address such a broad, and politically complex, audience?

I never situate myself like I am this complete, perfect, culturally astute, relevant human being. I’m never going to act as though I understand every single community, because I do not. I can only come from a 32-year-old Black girl who was raised in the South and in the Midwest. But, I do see everyone… I might not be an expert, or speak your language, or know all of your cultural customs, but you will not be ignored.

It is so important to me that I add in more voices and more representation [to “Civics for the Culture”]. More representation matters. And I know that that’s been a slogan and something we’ve been hearing for years, but it’s not a lie. It’s not a campaign bullet point. It is real.

All I can do is be the queer Black girl that tells you why this matters, who also has a little bit of experience working in politics.

What’s at stake for the demographics you’re specifically targeting with “Civics for the Culture”?

We’re also in a state where white supremacy is in our face in a way that I have not seen before in my lifetime. But nobody is getting a pass… We are calling you out on your stuff. “Civics for the Culture” is there to give you resources on how to dive into these politicians asking for your vote. If it don’t feel right, it ain’t right.