Researchers discover star being consumed by its smaller, deader neighbor 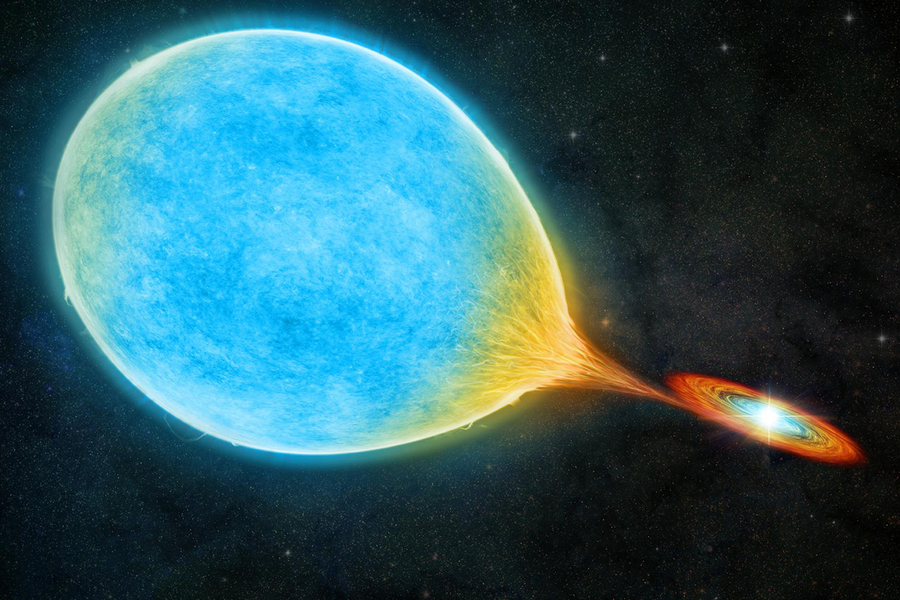 The Sun might be a solitary star in our solar system, but around half of all other stars in the Milky Way are part of binary systems, in which two orbit each other. These can have incredibly fast orbital periods — scientists have found two white dwarfs that take just 5 minutes and 21 seconds to orbit each other. Another binary system is notable for a different reason: one star is feasting on the other.

Around 3,000 light years away, there’s a binary system that belongs to a class called “cataclysmic variables.” That’s an incredible term I’m going to use after my next failed cooking experiment, by the way. In space terms, when a star similar to our sun tightly orbits a , that’s a cataclysmic variable. As notes, “variable” relates to the combined brightness of the two stars changing over time, at least in terms of how we view the system from terra firma. These luminosity levels can change significantly, which is where the “cataclysmic” part comes into play.

The two stars in the 8 billion-year-old system in question orbit each other every 51 minutes. That’s the shortest known orbital period for a cataclysmic variable system. The distance between the stars has narrowed over millions of years and they’re now closer to each other than we are to the Moon, researchers at Massachusetts Institute of Technology and elsewhere have determined. In a paper published in Nature this week, the researchers stated that the white dwarf is drawing material away from the Sun-like partner.

“It’s an old pair of stars, where one of the two moved on — when stars die of old age they become white dwarfs — but then this remnant began to eat its companion,” MIT astrophysicist and the paper’s lead author Kevin Burdge told Reuters. “Right before the second one could end its stellar life cycle and become a white dwarf in the way that stars normally do — by evolving into a type of star called a red giant — the leftover white dwarf remnant of the first star interrupted the end of the companion’s lifecycle and started slowly consuming it.”

The researchers found that the larger star has a similar temperature to the Sun, but has been reduced to around 10 percent of our celestial neighbor’s diameter. It’s now about the size of Jupiter. The white dwarf is far smaller, as it has a diameter around 1.5 times the size of Earth’s. However, it has a dense core, with a mass of around 56 percent that of our Sun’s.

The white dwarf has been munching away on hydrogen from the larger star’s outer layers, leaving the latter unusually rich in helium. The larger star is also morphing into a teardrop shape due to the gravitational pull of the white dwarf. That’s one reason for the changes in the binary system’s levels of brightness.

MIT notes that the system can emit “enormous, variable flashes of light” as a result of the hydrogen-sapping process. It added that, long ago, astronomers believed these flashes to be the consequence of an unknown cataclysm. While we have a clearer understanding of the situation these days, this is more evidence, as if it were needed, that space is cool and terrifying in equal measure.