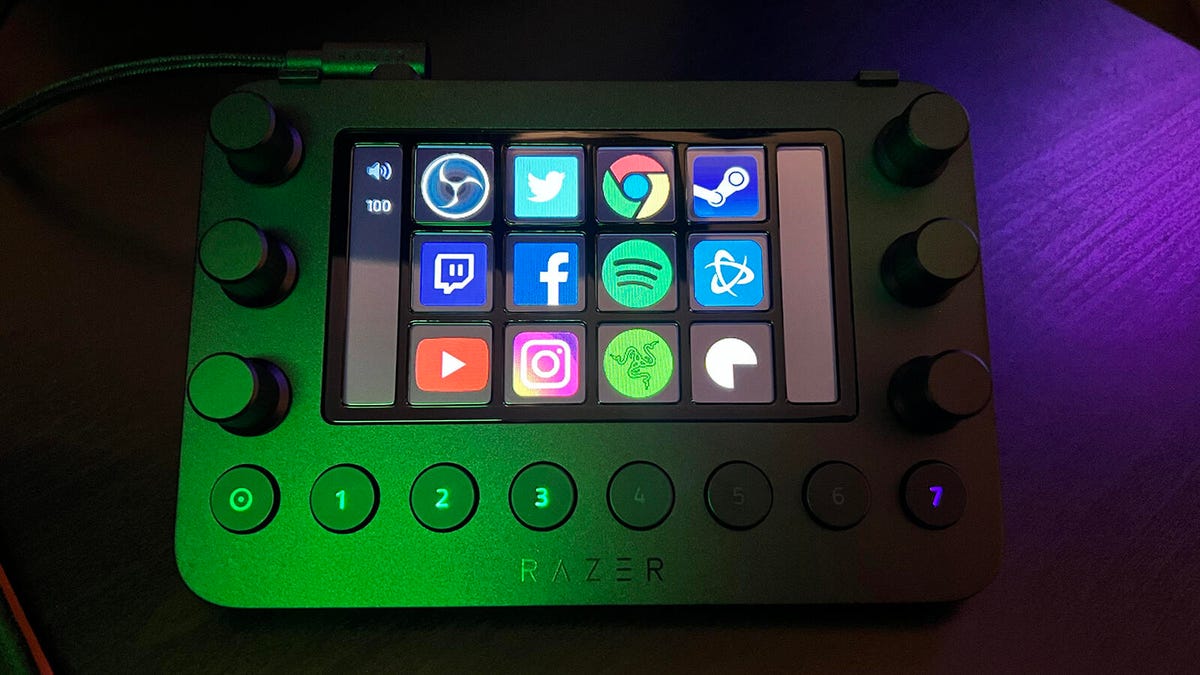 Razer’s new Stream Controller is the result of a collaboration with Loupedeck, a company specializing in “custom consoles,” or interface devices for creatives, streamers, and anyone else looking to gain more direct, tactile control over their work and play.

Unlike the obvious competitor in this space, the Elgato Stream Deck line, LoupeDeck’s devices rely on a combination of customizable buttons with built-in LCD screens (like the Stream Deck) and plain old physical buttons and knobs. The result is a device that can be customized to do everything from controlling your smart home, to expediting your Photoshop workflow, to running every aspect of a multicam gaming stream.

you don’t truly need the Stream Controller to do anything. But, once you have it, it can help you do almost everything better.

This collaboration takes the basic form of the existing Loupedeck Live, which was already aimed primarily at streamers, and adds a slightly tweaked aesthetic and Razer branding to the outside. But the real changes lie with the slew of new software components and tweaks designed specifically for Razer fans.

Let’s put the Razer Stream Controller through its paces and see if it’s just the tool you need to become the next big-name streamer on Twitch or YouTube Gaming.

This is the second Loupedeck-designed product I’ve gone hands-on with. The first was the Loupedeck CTa slightly larger device geared more toward creatives. It’s something I use on an almost daily basis for my photo and video editing tasks.

Despite the fact that the Loupedeck CT retails for twice as much as the Stream Controller, Razer’s collaboration with Loupedeck feels every bit as sturdy and confidence-inspiring as the CT.

The metallic faceplate adds to the weighty, “stays where you put it” feel of the device, and the solid plastic backplate has zero flex or creak, even when applying a fair amount of force to any of the included buttons, touchscreens, or knobs.

Speaking of the various interfaces, the touchscreens are all highly responsive, decently resistant to fingerprints, and particularly satisfying to actuate thanks to the built-in haptic motor, which provides a short buzz to let you know you’ve successfully done something.

More: The 10 best webcams: Join your next Zoom call in HD

The bottom row of buttons feels equally well-built, with a satisfying tactile click and interactive backlighting that changes based on your current setup and profile. These serve, by default, as a way to switch between pages of touchscreen button and knob functions, but can also be mapped to just about any other function you’d like.

The most unique aspect of Loupedeck’s consoles is their selection of knobs. The six dials to twiddle on this device all provide a smooth, ratcheting twist and satisfying click when pushed in. They’re sort of like the best mouse scroll wheel you’ve ever used flipped on its side.

The final aspect of the build quality is in some ways both my most favorite and least favorite part of the Stream Controller: its stand. The small plastic accessory clips into the screw holes at the top of the device, propping it up at an angle for better viewability and easier reach. It’s something I wish Loupedeck had included with the far more expensive Loupedeck CT. It would have saved me from 3D printing a series of not-that-great stands myself for it.

As useful as it is, that clip-on design gives me some concerns for its long-term durability. To be clear, it was absolutely stable and extremely sturdy-feeling during my few weeks of use with this device. However, any time plastic is being asked to bend in order to clip into place, fatigue can be an issue over the long term. If you plan to travel with this device frequently, and will be removing and installing the stand many times, it’s worth considering.

Side note for Wacom Cintiq owners: the stand actually hooks just about perfectly over the top of the Cintiq Pro 24. If you’re one of those Cintiq users, like me, who keep praying Loupedeck will create accessories to attach your Loupedeck (or in this case Razer) device to your Cintiq display, it’s a worthwhile use for the included stand.

I can’t pretend that I have much experience as a streamer. However, I’ve got years of experience tinkering with Loupedeck’s older models and companion software. I don’t need to be raking in the Twitch subs to say with confidence that I can’t think of anything a streamer might need to control their setup that this little device can’t help with.

While the Stream Controller will show up in Razer’s Synapse software, the actual job of customizing your device is handled by Loupedeck’s own app.

Once in there, you’ll be presented with the basic functions and default mappings, as well as all of the services the Stream Controller is set up to integrate with out of the box. This list includes streamer favorites like OBS Studio, Streamlabs, and Twitch, as well as other third-party offerings like Spotify Premium.

If you use a service that isn’t listed there, you can likely still download a plugin for it from Loupedeck’s extensive Marketplace. Despite the name, all plugins and icon packs for the Stream Controller are free. Plugins are available for Ableton Live, Audacity, Blender, DaVinci Resolve, Luminar, various Adobe apps, ZBrush, and even Slack, among many others.

More: How to get Photoshop for free

If you do feel like spending some cash, the Marketplace also lists stream overlays and emotes and badges for you and your subscribers. All of these, of course, integrate with the Stream Controller, allowing you to toggle and tweak them.

All of the components I’ve mentioned in this section still only represent the tip of the iceberg for the Stream Controller’s functionality. The real meat of the device’s power comes from its Custom section.

I could make you sit here and read a War and Peace-length treatise on all of the shortcuts, macros, functions, switches, and adjustments you can create in the Custom section. Instead, I’ll just say this: If you want to do something that’s even remotely possible on your connected PC, chances are the Stream Controller can do it, and do it faster than a human could.

What you get out of this device is entirely dependent on how much time you’re willing to put into it. If you commit to setting aside the time to dial in (no pun intended) the many, many options available to you, you’ll be rewarded with a device that can shorten your work time, expedite just about any task, and look pretty dang cool on your desk while doing it.

The big question for most people reading reviews is, “Do I need this thing?” If you’re already running tens of thousands of dollars’ worth of cameras, PCs, microphones, and lighting for a high-profile stream, this can be an invaluable tool for controlling all of that. And if that’s the case, the $260 purchase price is probably inconsequential to you anyway.

This review is geared more toward the aspiring or rising streamer, for whom the $260 price tag demands a bit more thought. If that’s your case, there are two things I would consider: image and functionality.

Let’s be realistic, a big part of being a successful streamer is your image. Having an enviable setup and a slew of perfectly customized RGB lights and displays can make viewers believe you’re worth watching, even when your gameplay falls short. Having this little device on your desk, and showing off how easily it lets you control your stream, could go a long way toward impressing, and subsequently growing, your viewership.

As for functionality, it may be that you simply don’t have that many devices, cameras, or lights to control. In that case, it’s debatable whether it’s worth dropping your cash on the Stream Controller. I will say, however, that the functions it can be put to are far more diverse than almost anyone might expect until they get one in hand. If you’re planning to use it for more than just streaming, the price may make more sense for you.

To put it plainly, you don’t truly need the Stream Controller to do anything. But, once you have it, it can help you do almost everything better.

The obvious direct competitor to the Stream Controller is about half the price. While it features a few extra LCD buttons, it has none of the adjustable dials or dedicated profile-switching buttons seen on the Stream Controller. But, if you just need push-button access to things like scenes, overlays, or cam profiles, this might be more than enough.

A much cheaper, but still quite versatile option. The Mini KeyDial macro pad was designed to be used alongside HUION’s drawing tablets, but it can be configured to provide a slew of functions for creative, productivity, and streaming applications. It’s also somewhat unique in including a customizable dial at this low price.