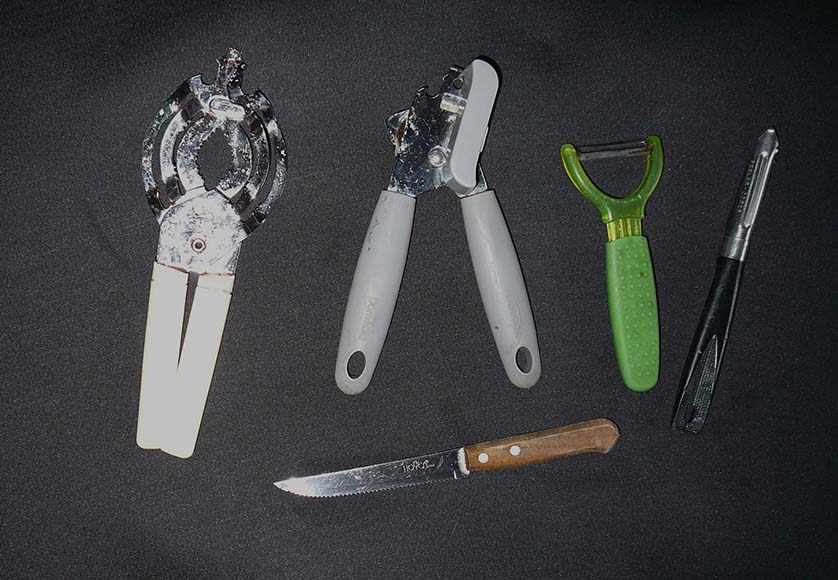 While Christmas shopping, I saw a hard-boiled egg remover. “I must have this because it might be useful,” I thought, despite the fact that I probably eat two hard-boiled eggs a year!

How did I survive taking my egg top off without this gadget? What’s so complicated about gently tapping my teaspoon around the top of the egg and lifting it up, which I did regularly when I was growing up? Do I really need a gadget for this? Clearly I think I do as I bought it and in the drawer it lives, along with other ‘useful’ little kitchen gadgets that I rarely or never use.

The Garlic Press – I don’t eat or cook with garlic. The lemon squeezer – my fingers work just as well. The marble cheese board with the wire cutter – I use a knife. The honey stick – I use a spoon! There are even gadgets that I don’t know what they’re for.

A can opener was an absolutely essential item until cans became ring cans – thank goodness, because the jagged sharp sides created by the can opener have always scared me.

I like the potato peeler, but I don’t use it to peel potatoes because I’m guilty of always using a knife and removing too thick skin. No, I rely on my peeler to peel carrots quickly, moving it up and down rather than scraping them, and I would feel lost without it.

I use the wooden meat cleaver to crush chocolate to make chocolate chips, but the best gadget we can’t live without is the lid opener for removing hard lids from bottles and jars.

The silliest gadget we have is the banana slicer, but is it really necessary when a knife does the job so well? In fact, I now realize that the humble knife can replace many of my kitchen gadgets!

I discovered that there were over 3,000 kitchen gadgets for sale on Amazon. The craziest included a large sharpener for carrots and I liked the molds for making fried eggs in the shape of a star, square or heart, because sometimes all you need is a bit of exciting variety !

There were scissors for cutting weeds and a pot spreader. What’s wrong with using a knife? Priced at 17€, it must be for the pot fanatics… I love the pot but, at this price, I will continue to use a knife!

So what exactly is a gadget?

A gadget can be described as a nifty thing that makes a job easier, i.e. a small specialized tool used to perform a particular function that differentiates it from another kitchen utensil that can be used for multiple tasks, e.g. example, the knife! Basically anything that performs a function can be categorized as a gadget and there are gadgets for every area of ​​our life.

Did you know that the word gadget was coined around 1886 when it was used to describe a small, specialized contraption? However, it was not until 1951 that the word first appeared in the Oxford English dictionary when it was also noted that gadgets often get thrown away due to the time it takes to clean them, which I totally identify with as I definitely don’t want to add to the dishes using a gadget.

In the past, kitchen utensils were very few and rudimentary, consisting of cutlery and pans for boiling, roasting or cooking food over a fire. A rotisserie spit mounted in a fireplace was one of the first kitchen gadgets and a jack was used to turn the spit with animals such as dogs or geese walking to turn it!

A huge innovation in the historic kitchen, which increased the efficiency of cooking, was the pewter roaster which reflected the heat on the food and allowed basting with the collected juices. Soon, toasters, colanders, potato mashers, whisks, graters, etc. were invented. In fact, most of the equipment we use today has evolved from its earlier counterparts.

With the advent of electricity, household equipment took off and, from the 1930s, objects such as electric stoves, irons, toasters, refrigerators, washing machines and vacuum cleaners released the housekeeping time.

Over the years, thousands of kitchen gadgets and equipment have been invented and continuously improved. For example, a toaster now has versions for hot dogs and bagels or for many slices of toast. Simple whisks turned into electric mixers with multiple gadget functions and accessories.

However, it’s not just in the kitchen that gadgets exist. They happen to facilitate almost everything in sports, technology, office, hobbies, pets, health, etc., and it seems that a gadget begets other gadget accessories to go along with them, making gadgets an essential part of our daily routines.

You could say that everything from the invention of the wheel to the computer is a gimmick and a novelty gimmick can easily become a necessity.

We are bombarded with marketing promotions to encourage us to buy more for ourselves or as gifts for others and yes, gadgets can certainly make our lives easier and fun.

Thinking about this article, I looked through my kitchen cupboards and was horrified to find machines that I never use either. The ice cream maker, the steamer, the waffle maker, among others, and I was ashamed but, in my defense, they were acquired over the years and not just by me.

There’s no doubt that we all need gadgets of one kind or another, and even the craziest ones, like the banana slicer, bring a little humor into our lives, albeit temporarily.

However, I certainly don’t need a lot of those little kitchen utensils that live in the drawer or those kitchen machines. So as part of my New Year’s resolution to declutter my kitchen and my life, a lot of these gadgets will have to be donated and someone else can have them and hopefully actually use them!

Besides, I now have a new passion that forces me to buy DIY tools instead, as well as their many accessory gadgets… but that story is for another article!

So now you know!

Isobel Costa works full time and lives on a farm with a variety of pets! In her spare time, she enjoys photography, research and writing.