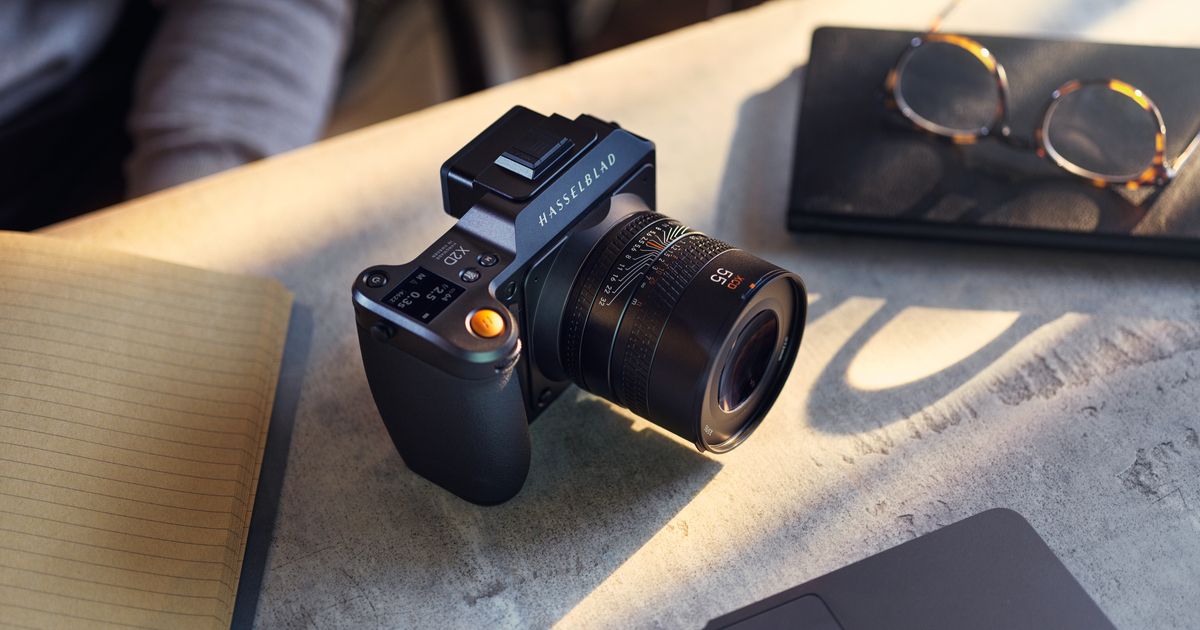 How the pricing table works

Hasselblad is a brand apart in photography. Made famous in particular for having sent cameras in the Apollo 11 capsule in 1969, the Swedish firm specializes in medium-format cases. This market has been swallowed up by Fujifilm for several years and the launch of its gamme GFXbut Hasselblad is still clumsily trying to come up with atypical large sensor bodies, as evidenced by today’s release, the X2D 100C, accompanied for the occasion three lenses 38, 55 and 90 mm opening at f/2.5.

Thus, in 2019, the Gothenburg company presented the X1D II 50C (then its vintage derivative, the 907X), a device with a 44 x 33 mm 50 Mpx sensor with an unusual and attractive look. Relatively compact and refined, this device took up the design of the previous model, improving its operation, while seeing its price drop by 35% to 6000 €. Three years later, Hasselblad returns to center stage with the X2D 100C. As its name suggests, this medium format hybrid is now equipped with a 100 Mpx BSI CMOS sensor and stabilized on five axes in addition.

In addition, to make sure you never run out of storage, in addition to a CFexpress Type B port, the X2D 100C comes with a 1 TB internal SSD. The electronic viewfinder gains in definition and now peaks at 5.76 Mpts, when the touch screen is adjustable, more than 9 cm diagonally for a definition of 2.36 Mpts. A small control monitor on the right shoulder is also present. As with previous iterations, “Blad” bets on a certain form of simplicity in the operation of a case with unusual, but quite elegant lines.

The smallest stabilized medium format hybrid on the market

The one that Hasselblad presents as “the smallest stabilized medium format camera on the market” (148.5 x 106 x 74.5 mm for 895 g) indeed seems much more refined than its direct rival at Fujifilm, le GFX 100S. The Swedish firm has also announced that it has refined its autofocus system, often the downside of this type of device. The case can count on 294 zones of a phase detection autofocus.

The beast records images up to 16 bits with, according to Hasselblad, a dynamic spanning 15 stops, while the sensitivity of the sensor extends from 64 to 25,600 ISO. The burst reaches the speed of 3.3 fps, which is hardly surprising. The central mechanical shutter (integrated in the optics) climbs up to 1/4000 s with flash synchronization at all speeds, and this for 68 min if necessary, but only with compatible optics like the new XCD 2.5 /90V. The electronic shutter reaches a maximum of 1/6000 s.

But where is the video part?

The connection remains fairly basic with a single USB-C 3.1 Gen 2 port. The battery life is announced for 420 views, the latter can be recharged by USB. In these various press releases, Hasselblad makes no mention of the video part. The X1D II 50C in its time could capture up to 2.7K, but without autofocus. Now the company has decided to completely remove the video component. It’s a radical choice knowing that the Sony sensor used, the same as in the GFX 100S is quite capable of very good performance in video.