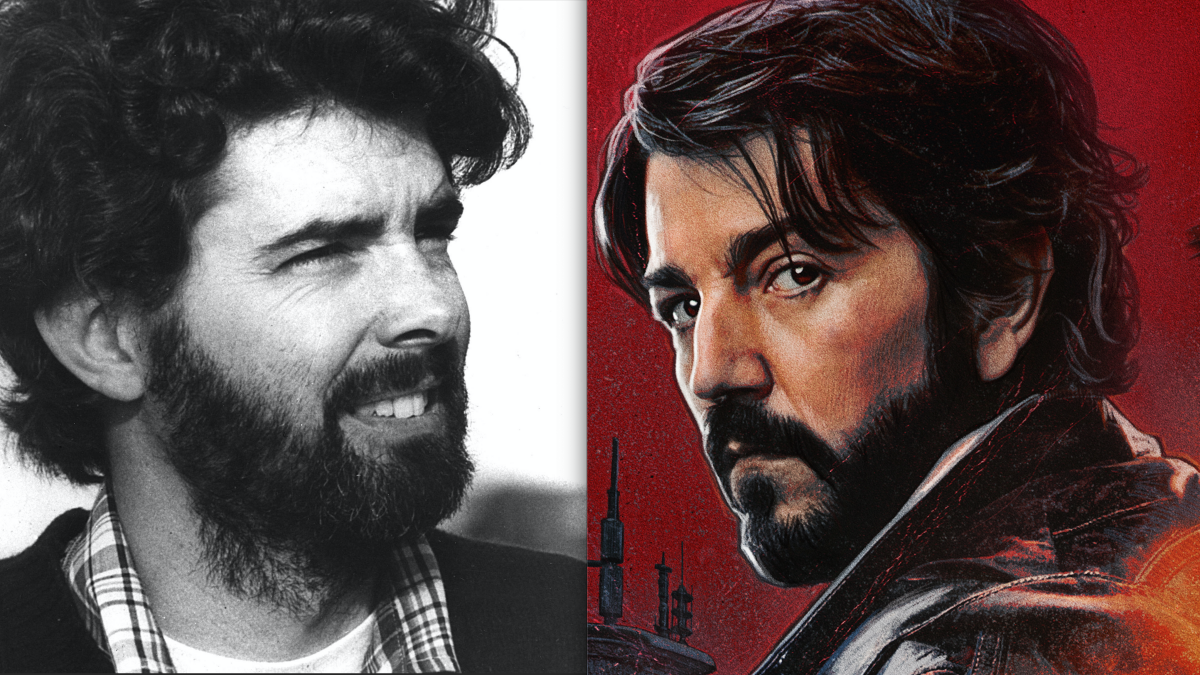 A long time ago, the creator of a galaxy far, far away wanted a bunch of big-name filmmakers to play in his brand-new space sandbox.

“The people are there, the environment is there, the Empire is there, and now [other directors] will start building on it,” George Lucas told Rolling Stone in his first post-Star Wars interview in 1977. “It’s a competition…friends of mine will want to do a much better film, like ‘I’ll show George that I can do a film twice that good.’ And I think they can.”

He may well have been right. The close friends Lucas had in mind included icons of gritty 1970s cinema: Francis Ford Coppola, Brian De Palma, Martin Scorcese, and other rebels against the old Hollywood order. (If that entourage surprises you, you’ve probably never seen Lucas’ first flick: the difficult, groundbreaking dystopia THX-1138, based on an award-winning student film.)

Of course, things didn’t turn out the way Lucas wanted back then. Following the painful birth of The Empire Strikes Backwhich almost killed his company, the creator piloted a new course – alongside Steven Spielberg – from indie rebel to emperor of entertainment. Lucas tightened his grip on Star Wars, made himself a billionaire, then sold Lucasfilm to Disney – which is only now, with Andorconducting the experiment that the Lucas of 1977 intended.

The directors of The Godfather, Carrie and Taxi Driver are all in their 80s as of November 2022. We’ll probably never know what their takes on a galaxy of droids, aliens and stormtroopers would have looked like. But watch enough Andorthe seventh episode of which just dropped on Disney+, and you start to hear a faint echo of this alternate auteur multiverse.

Like those giants, showrunner Tony Gilroy cares more for original story than for genre. He’s no fan of space fantasy, but that actually works in his favor. He is the first writer-director in 45 years to step into Lucas’ sandbox completely unhindered, with all the runtime he needs to build the sandcastle he has in mind.

And as Episode 7 makes clear – no spoilers here! – that castle has been constructed very deliberately. Andor doesn’t care if you think it started slow; it’s not going to insert blaster battles just to keep you reaching for the popcorn. Gilroy is best known to the casual crowd for his Jason Bourne series, while cinema nerds recall that he was Oscar-nominated for his first film, the stunning Michael Clayton (2007), which he wrote and directed.

Either way, dude knows how to spin a tale. And it shows.

Beyond a few visual or verbal easter eggs, Andor offers none of the fan service that scuppered movies like Rise of Skywalker or shows like Book of Boba Fett. It spent whole episodes building tension for a heist with galactic implications, and the Cold War thriller-style build-up hasn’t stopped post-heist.

The Mandalorian may have touched our hearts, but it is also essentially traditional TV with an adventure-of-the-week format. Just like the original Star Warsit is a romantic homage to Saturday morning serials, westerns and samurai flicks. Andorby contrast, is nurturing a vast cast whose importance is being revealed piece by piece, and already got us invested in each character. As good art should, it feels both extremely relevant to our times, and timeless.

The people, the environment, the Empire: Gilroy has taken Lucas’ building blocks and made something new in the galaxy. He called it “Dickensian” and “like a 1,500-page novel” in our interviewand that looks less like hype with every episode. You can see it in the critical acclaim, the audience scores and the social media reaction: a sense of relief or surprise that Star Wars is trying something new, reaching into the possibilities beyond the worn old action-adventure mode – and that, in this oft-divided fandom, everyone seems to agree the new thing is good.

All of which leads to the question: Why did it take so long to try the first thing George Lucas thought of doing when he knew his “little space thing,” as he self-deprecatingly called it, was a hit?

Star Wars and the auteurs

To answer that, we first have to ask: Why did Lucas want to give his baby away in the first place? He was famously controlling, even then, and fumed for years over minor studio cuts to THX-1138 and American Graffiti. His biggest coup in the Star Wars contract wasn’t his cut of merchandising, as many believe; it was his giving up a large salary from 20th Century Fox in exchange for sequel rights.

But he also trusted his friends and fellow cinema-lovers. Apocalypse Now was Lucas’ baby too, and he handed that over to Coppola with minimal regrets – even though Coppola’s dark vision couldn’t have been more different from Lucas’ optimistic outline.

Besides, making Star Wars had been a truly traumatic experience that drove Lucas to the hospital (with a panic attack, rather than the heart attack he feared, but still.) He would not sit in the director’s chair again for another 20 years. In the summer of ’77, this nerdy introvert was so afraid of fame, he tried to send a lookalike friend to meet fans outside his hotel in his stead.

The Rolling Stone interview revealed a man who wanted to retire and run a comic book store while his friends – who also just happened to be the best directors of their generation – took over the Star Wars frontage. But they were also tied up with other projects (Coppola, famously, would be stuck assembling reels of Apocalypse Now for the next 2 years), so Lucas turned to a film school mentor, Irvin Kershner, to direct the sequel. Lucas’ Star Wars profits would fund an auteur’s vision after all.

That may have been both the best and the worst move Lucas ever made. Best because of the result; the extraordinary visual sensibility of The Empire Strikes Back is pure Kershner. Worst, because it gave Lucas yet more PTSD. Kershner worked so slowly that Empire ran over schedule by 30 days. Lucas had to go cap in hand to the big banks; his company was weeks away from not making payroll.

For Return of the Jedi, Lucas first offered the job to another major auteur, David Lynch. But when Lynch turned him down to direct DuneLucas tapped obscure British TV director Richard Marquand. Not for his vision, but because he would be pliable, fast, and cheap. Wrapping up the trilogy fast while funding Lucas’ filmmaking utopia, Skywalker Ranch, became the goal, more so than putting something new on screen.

Whatever you think of his three Star Wars prequels – and as Andor proves, there’s nothing inherently wrong with a prequel – Lucas clearly wanted to be an auteur again. He needed to take his franchise in new directions. His dream of a digital Buster Keaton turned into Jar Jar Binks; his bid to write a romance gave us the unconvincing Anakin and Padme. But you can’t claim he didn’t try.

“Whatever you do,” Lucas advised the up-and-coming Simon Pegg at the Revenge of the Sith premiere, “don’t get stuck making the same movie for 30 years.”

With its $4 billion investment in Star Wars on the line, Disney put great pressure on Lucasfilm and The Force Awakens director J.J. Abrams to play it safe. Lucas’ treatment for the sequel trilogy would have delved into the microbial world of midichlorians: out much of it went. Abrams is very good at nostalgia and creating compelling mysteries, both of which Force Awakens delivered. But as the underwhelming Rise of Skywalker revealed, he’s also terrible at wrapping up stories.

Between those Abrams bookends came three movies that ultimately left Lucasfilm with a kind of corporate PTSD about auteur-led projects.

Rogue One, the basis for Andor, was a triumph that won director Gareth Edwards the rare distinction of a congratulatory call from Lucas. Trouble is, the creator really should have been calling Tony Gilroy, who’d been quietly drafted to reshoot much of the film when the company got skittish about Edwards’ handheld documentary style.

For The Last Jediwriter-director Rian Johnson was given more of a free hand. Result: the boldest, darkest, most visually original Star Wars since Empire. But it also activated a noisy minority of internet denizens, most of whom had no idea they were actually complaining about elements of Lucas’ original treatment. (Luke Skywalker as a bitter old hermit training a young female Jedi was the creator’s idea, as was Luke’s death.)

And then there was Solowhich Phil Lord and Chris Miller came to insist was a comedy in the style of their highly meta Lego Movie. Lucasfilm may have been right to argue that it wouldn’t work – Star Wars can be funny, but it has never once winked at the audience. Still, all those months of costly Ron Howard reshoots did was to turn the box office’s biggest heist movie of all time into a financial failure.

The firing of Lord and Miller set the tone for what auteurs could expect. Rian Johnson’s trilogy, Patty Jenkins’ Rogue SquadronTaika Waititi’s untitled Star Wars film: all are currently on the back burner, if they ever happen at all. Some oustings were justified – Josh Trank, originally set to direct a movie version of Boba Fett, basically imploded on Fantastic Fourwhile the Game of Thrones guys did their Star Wars trilogy no favors after Thrones season 8.

Still, the message was clear: you get your Star Wars project on screen if you don’t try anything risky. Meanwhile, Star Wars-loving filmmakers in all genres are out there with ideas just begging to be made:

The MandalorianStar Wars TV’s first outing, was run by mega-fans Jon Favreau and Dave Filoni, who knew how to color inside the lines. I love Baby Yoda as much as anyone, but the show didn’t have the courage to write him out permanently when it made sense for the story. Bringing him and Mando back randomly in the middle of Boba Fett seemed a sure sign that the franchise was flailing, begging its audience: What do you want to see? Please, just tell us what to do!

Tony Gilroy was himself the beneficiary of Lucasfilm skittishness; he replaced The Americans showrunner Stephen Schiff, Andor‘s original creative guide. Gilroy had come to like Star Wars while doing the Rogue One reshoots, but he also wasn’t an Abrams-style fanboy; he could take it or leave it.

Luckily, finally, Lucasfilm decided the time was right to give an auteur everything he wanted – including real-world sets (rather than the cheaper “I can’t believe it’s not real” high-tech studio known as the “Volume” used for all other Star Wars TV, which has its own issues) and total creative control.

What George Lucas thinks of the result, whether he loves it as much as he loved Rogue Onewe don’t yet know. But perhaps, just perhaps, the quality of Andor will tempt the 78-year old creator out of retirement to make the Star Wars TV show he wanted to try for years (the project, then known as Underworldbecame prohibitively expensive; its 50 scripts were shelved).

That, after all, was the other part of the original 1977 “competition” plan: Lucas would return after his auteur friends raised the bar – “so I can do one twice as good as everyone else.”