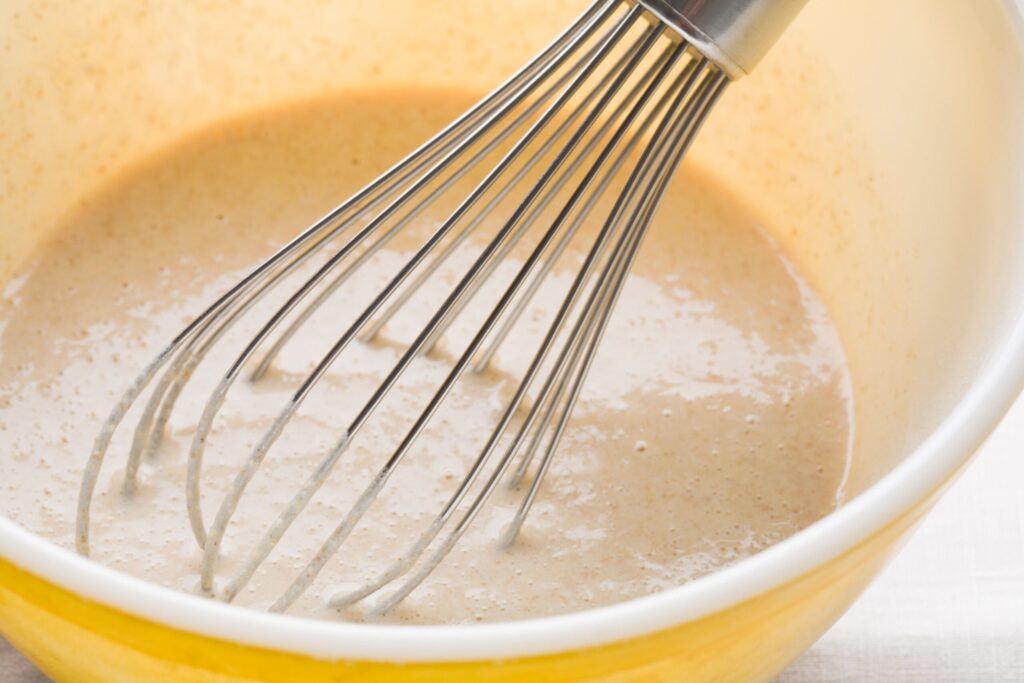 We may earn revenue from the products available on this page and participate in affiliate programs.

Let me start by saying that I’m pretty good at making pancakes. With a thin layer of butter and my trusty non-stick skillet, I can get a small batch of marbled blonde-colored pancakes with slightly crispy edges and fluffy marshmallow centers. But I usually only make them for myself in my studio, so factors like consistent size and shape – or messy technique – don’t matter as much as when cooking for a crowd.

I recently spent a long weekend at a mountain cabin with my family and was tasked with making a batch of pancakes for breakfast one day. I thought it was the perfect time to try the OXO Good Grips Perfect Paste Dispenser to see if I could keep things more consistent and efficient on a larger batch.

At first glance, this dispenser is well built with many thoughtful design details. The idea is to load the dough into the top part of the tool – which has a wide opening, so it’s easy and not very messy – and squeeze the handle to open the rubber tube at the bottom to release your dough . When you’re done, simply release the handle and the tube will be crushed to stop the flow.

Right off the bat, I loved that the handle is rubberized, which will keep your grip steady even with fingers of butter or batter. It also opens and closes smoothly and is large enough to fit all hand sizes. There’s an interior funnel that helps guide your batter to the dispenser tube and a handy top lid that doubles as a drip tray when you’re between pancakes, so no extra plates or dishcloths are needed. And there are four different types of measuring marks on the hopper for you to monitor your amount of batter and distribute it evenly.

I’m very interested in just seeing if this tool does what it claims to do (distribute batter smoothly and cleanly) as well as if it can solve the most common pancake problems: getting everyone a consistent size, shape consistent and a less-messy experience overall.

I decided to test this gadget using Bubby’s Pancake Mix (yes, of New York’s iconic restaurant and pancake mecca) as it is notably thicker and I wanted to test the brand’s claim that the dispenser works just as well with thicker batters as it does with thinner batters. Plus, it just makes the fluffiest, tastiest pancakes from a mix I’ve tried, and are just as delicious without butter, jam, or syrup.

I prepared two batches: one thick, one thin. The first batch was prepared according to the instructions on the package which ask us to keep the batter rather thick and lumpy for fluffier pancakes. On the other hand (pun intended), I added more milk to create a runnier consistency.

I live by the rule of thumb that the first pancake is always a practice pancake and you can’t judge a batch by its first born. That being said, the pancake one of the thicker batter batch was rough. The dispenser needed a good jerk of the wrist to start and once it started releasing the paste it came out in small drops rather than a steady stream; it produced a pancake resembling a Rorschach inkblot. It is possible that the rubber distributor tube causes friction which hinders the flow of the paste.

A pro: the dispenser was easily used with one hand, leaving the other free to hold your pan steady, and had no leaks when returned to the closed position except for a small drop left at the bottom of the tube below the closing point.

Next we tried the thinner dough batch. The dispenser still required a few gentle shakes to sink, but did much better. The dough is released at a slow to moderate pace which is fairly easy to follow, although there is a bit of a learning curve in figuring out the right speed and motion for your hand (I have found the spirals slower from the center work better) . The inner funnel also worked wonders when it came to guiding the dough from the hopper to the rubber dispenser tube, so you won’t get that lost half inch of stuff stuck inside at the end.

Another benefit was that the side measurements printed on the hopper remained easy to read throughout the process – I was initially concerned that the inner dough smear would be an obstacle here to seeing how much you actually have left – so that you can correctly dose each pancake to be even in size. However, the marked measurements are skewed on the larger side for home pancakes in my opinion – you have to be a magician with your spatula technique to pull off anything beyond the silver dollar size.

This dispenser cleans like a dream. It’s technically hand wash only, but it did fine on the top rack of my dishwasher for a first clean before use, although I’d say hand wash from there just to be safe. The rubber tube also comes off for easy cleaning, but you probably won’t need it: I held the dispenser in the open position under the running tap and it was rinsed off in seconds. As for storage, it’s bulky and can be difficult for little kitchen dwellers like me to find space, but if you’re someone with moderate to ample storage space, that shouldn’t be a problem. of problem.

All in all, I would recommend this tool to someone who generally prefers thinner batters – whether for pancakes, cupcakes or otherwise – cooks for a crowd, prioritizes a tidy kitchen, is demanding on equal portions and appreciates the convenience of having one hand free. And also, someone with a little kitchen space to spare.

If your dough is generally more viscous (and you don’t mind a bit of a mess), I’d say stick to a quarter cup measuring cup or even an ice cream scoop in some cases to distribute equal amounts. And if you go that route, do yourself a favor and get Bubby’s pancake mix for your next Sunday brunch at home. Thank me later.