AMD passes the 5th with its highly ambitious Ryzen 7000 processors 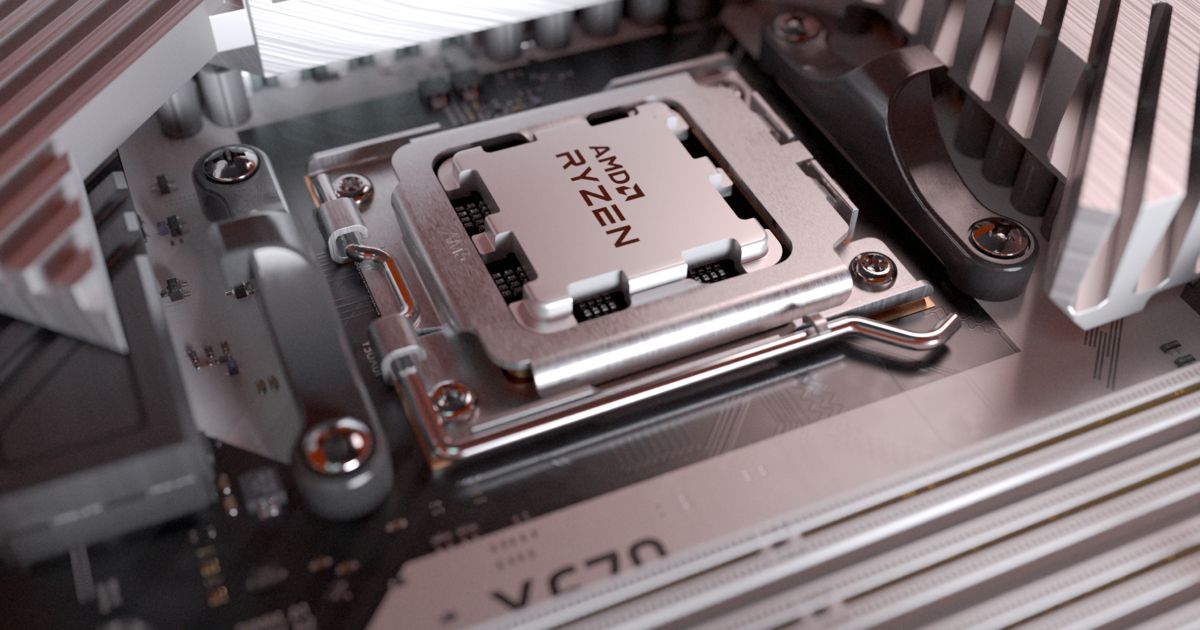 AMD had already repeatedly mentioned its new generation of processors for desktop computers. Succeeding the Ryzen 5000s released a little less than two years ago now, the Ryzen 7000s inaugurate a new platform called AM5 – the previous Ryzens were based on an AM4 platform which will have had the merit of being used for 5 years. Beneath the bodywork, AMD is now using the 4th revision of its Zen architecture with the promise of significantly improved energy efficiency.

First of all, let’s remember that the Ryzen 7000 are the first consumer processors from AMD to benefit from 5 nm engraving. This makes it possible to increase the number of transistors per mm² but also to lower energy consumption, which gives rise to much higher frequencies than on the Ryzen 5000s with a maximum of 5.7 GHz peak when cooling conditions are optimal.

AMD thus indicates that single-core performance is increased by 13% on average at the same frequency and up to 44% in applications taking advantage of all the cores. Enough to pass the 12th generation Intel Core chips, both in games and in applications according to AMD – but this generation of Ryzen processors will ultimately go into battle against the 13th generation Core, let’s keep it in mind. AMD thus gives the example of 3D rendering in raytracing, executed 57% faster on a Ryzen 9 7950X than on a Core i9-12900K. In games too, AMD is confident, assuring that a “simple” Ryzen 5 7600X would be faster than a Core i9-12900K, with an average advantage of 5% on a selection of games made by AMD.

At launch, only four references will be offered for sale: the Ryzen 5 7600X (6 cores), the Ryzen 7 7700X (8 cores), the Ryzen 7 7900X (12 cores) and the Ryzen 9 7950X (16 cores). We note that the number of cores does not change compared to the Ryzen 5000, which is not the case for the power consumption. Thus, the Ryzen 9 7950X and 7900X are given for a maximum of 170 watts, when the Ryzen 9 5950X was satisfied with 105 watts. A funny situation, AMD having never ceased to mock the 12th generation Cores for their high power consumption. A curious choice moreover, this unclamping certainly making it possible to reach a higher frequency, but at the cost of the need to use a very efficient cooling system – and therefore quite expensive.

However, AMD assures us, this series of processors offers eminently higher energy efficiency than that of the competition, that is to say that of 12th generation Intel Core chips. Thus, the architectural changes and the use of 5 nm engraving allow the firm to put forward rather flattering figures such as the use of a chip approximately 50% smaller and offering approximately 47% higher energy efficiency. Other interesting data, the Ryzen 7000 would consume 62% less energy than the Ryzen 5000 at equivalent performance or 49% more performance at similar power consumption.

Concerning the AM5 platform – which will be used at least until 2025 – in itself, the new socket has the good taste to use the same fixing system as the AM4 socket. This allows current cooling systems to be fully compatible with new motherboards. With the AM5, AMD has provided a design that will be able to withstand a maximum load of 230 watts, thus leaving the manufacturer room for overclocking or possibly more power-hungry chips.

For the time being, two chipsets are planned, each declined in Extreme versions – for a total of 4 chipset references therefore. High-end motherboards will be based on the use of X670 Extreme or X670 chips and entry-level versions will draw on B650 Exteme and B650 chips. Both chipsets will result in similar performance, but the X revisions will offer more latitude for overclocking. As for the difference between the Extreme and classic versions, this is PCIe 5, which will be limited to graphics card support on the classic versions while it can combine graphics cards and SSDs on the Extreme versions. The opportunity also for AMD to announce that the PCIe 5 SSDs are not expected until November.

On the memory side, it will be exclusive support for DDR5. Although it is still much more expensive than DDR4, AMD expects the two technologies to be sold at the same price towards the end of the second half of 2023. This support for DDR5 is accompanied by a new technology named AMD Expo which will allow you to overclock the memory with a single click via a specific application. A novelty which is however not exclusive, Intel offering a similar functionality on its 12th generation Core.

Regarding pricing, only prices in dollars have been communicated to us – French prices will follow shortly. It is thus necessary to count $299 for the 7600X, $399 for the 7700X, $549 for the 7900X and $699 for the 7950X. Prices quite close to those charged for the Ryzen 5000 at their launch. Availability is scheduled for September 27 and there is no doubt that AMD will deliver more technical details by then on its new platform, its new features or even on the overclocking capacities of its chips. In the process, Intel should give more details on its 13th generation of Core processors. The start of the school year promises to be busy.